Review of The Game Munchkin Quest

Munchkin Quest is Hours of Fun!!! 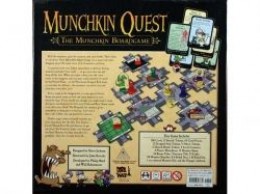 Munchkin Quest is a chance for us gamers to have some quick fun on game night. Of course by quick, I mean a couple of hours, but considering that I have spent better than 18 hours doing RPGs when I was younger, Munchkin Quest is quick!

Let me just say that if you aren’t familiar with the series, Munchkin the original card game from Steve Jackson games was the catalyst for the series and it has spawned a plethora of expansion packs and the spin-off game Munchkin Quest .

My suggestion is to grab a copy of Munchkin Quest, call some friends and tell them to clear their schedules and pick up some Jolt cola and Cheetos on their way over.

Do You Dare Enter the Munchkin Quest Dungeon?

Quite unsurprisingly, Munchkin Quest games always start with the character at the dungeon’s entrance. This is also where they need to get to when the time is right to fight an epic monster, leave the dungeon and win the game. With the proper bragging and gloating rights of course.Play proceeds with the adventurers entering new rooms and fighting monsters to gain levels and treasures to assist them in their quest to achieve 10th level and escape the dungeon.

Well, some aren’t aren’t quite so horrid…

As with all the Munchkin games, humor is a key element to Munchkin Quest. Monsters, treasures and weapons alike are very tongue in cheek. As the game goes on you can work with other players, stab them in the back, mess them over and do pretty much whatever it takes to win. Who says getting your best friend killed by a Level 5 Pinata can’t be fun? And yes, it can be done.

When you enter a new room in the Munchkin dungeon you are faced with a new monster. A turn of the card may reveal as easy of a foe as the beastly Goldfish (yes a goldfish) to horrors on the order of the dungeon shaking Plutonium dragon, or my arch-nemesis the Auntie-Paladin.

When you step into the Room of Questionable Odors and come face to face with a Napalm Slime, you will need more than good looks to win the day. Are you a Wizard? Then perhaps Pointy Hat of Power is in order. You may want an Unreasonably Large Sword as well. As the game progresses players can find a huge array of armor, weapons potions and trinket to use their advantage in defeating foes.

The original Munchkin Quest just not enough? Here are two expansions to keep the insanity rolling!

Which is Better? – Munchkin Quest or Munchkin?

You may or may not know, but there exists both a purely card based Munchkin game as well as Munchkin quest.  Which begs the question of which is better.

Both games are fun as hell, and honestly it depends on the number of players and the mood I’m in.  With standard Munchkin, you can swap decks in and out and change up the flavor more.  Munchkin Quest though is a bit more controlled and organized.  Which do I play?  Both depending on the night and the crowd!